You may not have known this, but there are actually a few breeds in the feline world that are known for their curls. We know that there are a few breeds out there with no hair, such as the Peterbald and the Sphynx, but curly coated cuties are making a name for themselves, too! These cats are each unique in their own way—and they are all just absolutely adorable.

Meet the curly haired cat breeds of the feline world below

Given the name, this one doesn’t come as too much of a surprise, right? These cats look straight out of 1985, but those curls of theirs come compliments of a genetic mutation that has resulted in their signature kinky waves. Interestingly enough, LaPerm kittens can be born bald or with rather short hair. Once they reach two to three years of age, their wavy ringlet coat will start to fully reveal itself.

The LaPerm is a naturally inquisitive and playful breed of cat with a love for climbing. And despite their super cool rockstar hair, they’re surprisingly easy to groom. And contrary to what some might say, these cats actually do not fall on the list of hypoallergenic cat breeds. 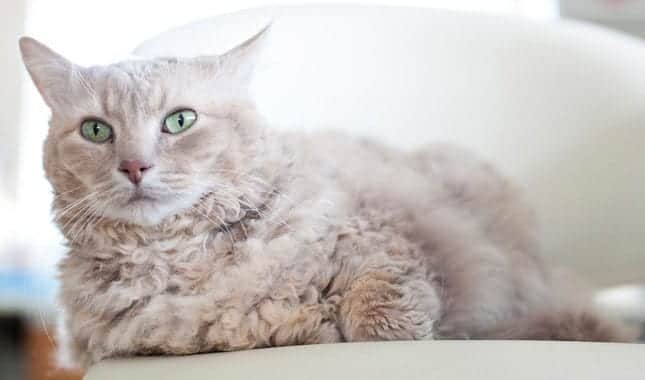 This curly haired cat breed looks like a product of the 80’s—and it is! Back in 1982, a farm kitten appeared in Oregon born completely hairless with nothing but a tabby coat-looking pattern on her skin. Once the kitten reached eight weeks of age, their curly coat started to develop. Fast-forward a decade, the farmer got an expert opinion on her curly cats. Once she learned just how rare these curly haired cats were, the breed was born through controlled and careful breeding on her farm to establish the LaPerm cat breed we know today. 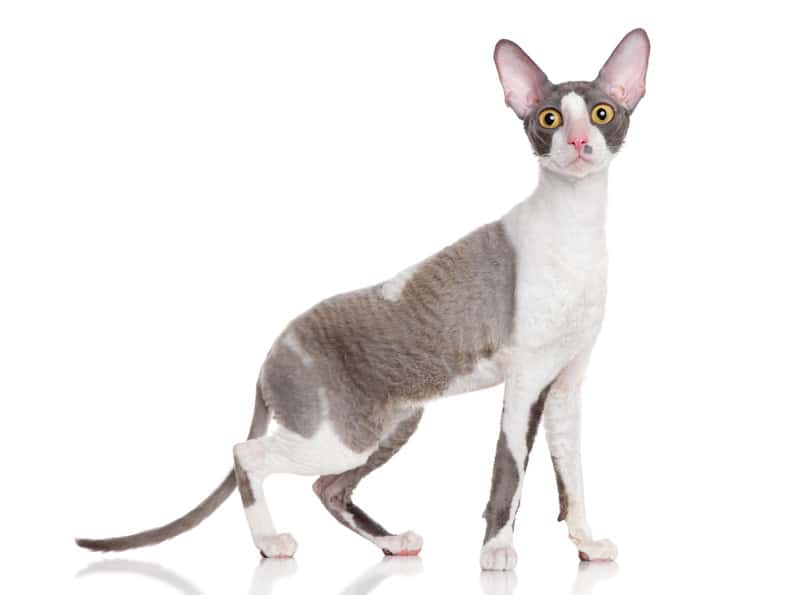 I’ve had the opportunity to meet one of these cats, and they are absolutely beautiful. Loving, playful, and totally friendly, the Cornish Rex is a cat breed that is extremely slender, with noticeably large ears, a ballerina’s frame, and a skinny tail that seems to go on forever. The body of the Cornish Rex is almost like the Whippet of the dog world. These active kitties maintain their kitten persona throughout much of their life and do best in homes where they will receive lots of attention.

Their coat is very soft to the touch, with tiny ripples of curls all over their body. That curly coat of theirs requires very little care, and it’s super fine and lies close to their skin. To the touch, it almost feels as if you’re petting a rabbit and not a cat. While shedding for this curly-haired cat breed is quite minimal, they do shed some and are not considered to be hypoallergenic. Another barn cat that became a pedigree, the first Cornish Rex cat was born from a litter of barn cats in 1950. The cream-colored kitten was born in Cornwall, England, and named Kallibunker. As time progressed, little Kallibunker proved to be unique when compared to his cat siblings. This little kitten with lamb-like waves was slender and fine-boned with a long, bony tail, and he also had an oversized head and large “bat ears” to match. Over time, they discovered through the Cornish Rex breeding process that the gene for these kitties is recessive. While the name says “Devon”, it should say “Dog”! Many owners of Devon Rex cats report that these unique looking felines are like a dog trapped in a cat’s body. To have a Devon means that you must be prepared to be owned by a Devon. These cats are outgoing, that are naturally curious about everything and anyone around them.

Many think that this curly haired cat breed with a suede-to-the-touch coat resembles that of an alien life form. This is a breed with an equally unique and distinct look that sets them apart from other breeds of the cat world. Their heads are large with eyes spaced far apart, skinny necks, and smaller bodies. Many often refer to Devon Rex cats as Pixie cats. 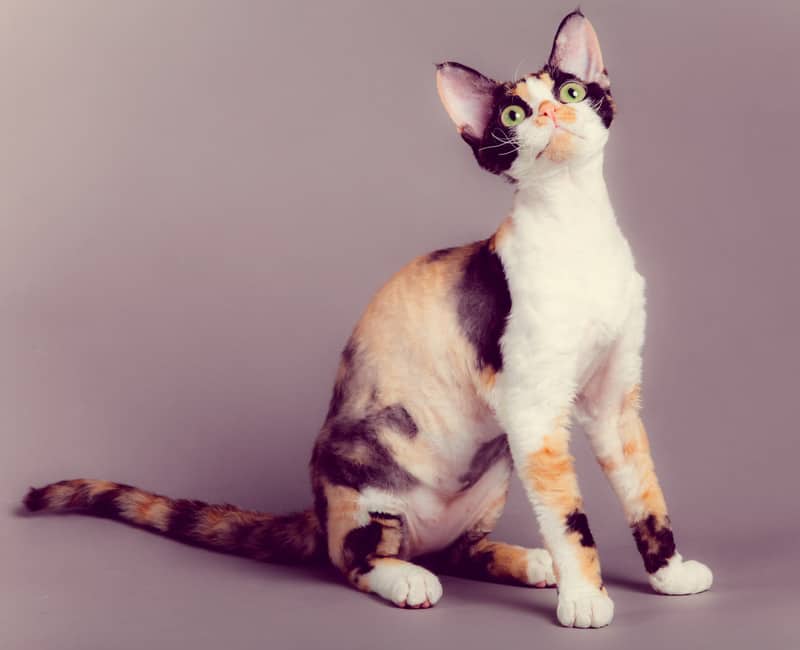 In the late 1950’s, a stray cat gave birth in Devonshire, England to a rather interesting-looking curly-haired kitten. The owner was smitten with the kitten’s elf-like features and wonderful waves, and Kirlee the kitten went on to become the founding father of this curly haired cat breed. They were bred with Cornish Rex cats to preserve the breed look and that curly coat. This Rex cat is actually made in the USA. The first kitten born with the curly coat that lived on to establish the Selkirk Rex cat breed was born in 1987 in Montana. The curly haired kitten caught the attention of a cat breeder named Jeri Newman who then took him into her care. She decided to name the kitten Miss DePesto after a curly haired character on  Moonlighting played by Allyce Beasley.

DePesto was bred to a black Persian male, and the result produced three Selkirk Rex kittens and three ordinary kittens. Every single Selkirk Rex of today can trace their history back to Miss DePesto. Fun little fact about the breeds name: Ms. Newman named the breed “Selkirk” after her stepfather, which makes them the first and only breed of cat named after a person. 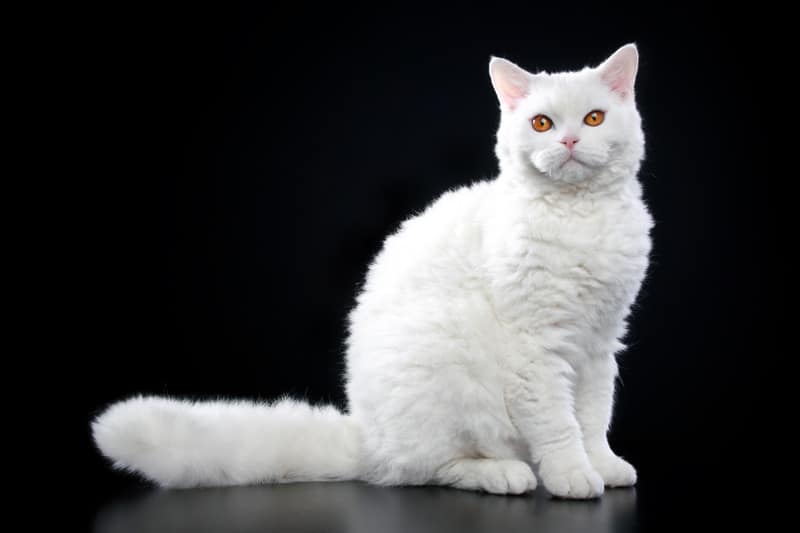 Unlike the short and fine hair of other two Rex cats mentioned above, the Selkirk Rex has a full and fluffy coat that almost looks like wool. Because of all that fluff, the Selkirk is sometimes nicknamed “the cat in sheep’s clothing.” And due to their breeding with the Persian, these cats are often relaxed, sweet, and calm, much unlike the other two Rex cat breeds listed above. If you’d like to learn more about Persian cats, check out my article on them here.

If you enjoyed this curly haired cat breed article, share it with another cat lover that you know so they can enjoy it, too!