If you’re a cat lover, well, chances are that you’ve come across one of the many brilliant Scott Metzger Cartoons over the years. Whether it’s a funny cat meme cartoon you saw floating around social media, or perhaps you have a copy of his cat book, 50 Ways to Wake Your Human, Metzger’s cartoons have spread laughter to many cat lovers across the globe. 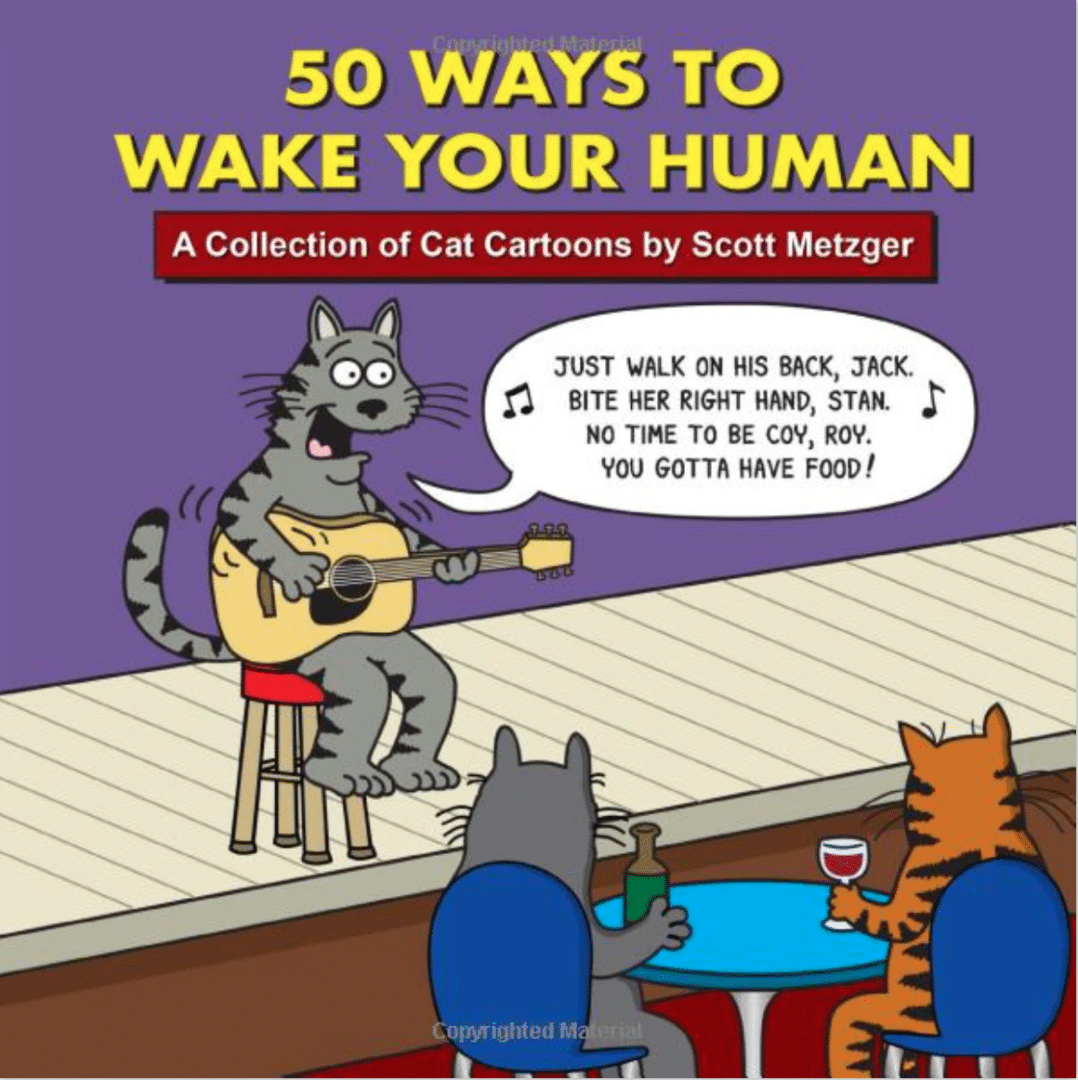 But in addition to all these purrfectly hilarious cat cartoons, Metzger is a man of many creative talents. He’s been tinkering away at comics for over two decades, but it seems he’s found himself the perfect niche when it comes to giving cat lovers a chuckle. I had the privilege of connecting with Scott hoping to feature him on Cattitude Daily, and thankfully he agreed. So, if you’d like to get a peek inside the mind of a creative genius, just keep reading!

How long have you been drawing cat cartoons?

I’ve been drawing cat cartoons for 20 years, but I didn’t really focus on cat cartoons until about 10 years ago, when I began drawing cartoons inspired by my old cats, Simon and Frankie. Simon was a big, fat tabby cat who had a lot of personality. Frankie was a skittish, feral black cat who was always on “high alert”—he’d spend most of his day hanging out under the bed. This was my first cartoon that was inspired by Simon and Frankie. The cat on the left (Clyde) is based on Simon and the cat on the right (Clarence) is based on Frankie. And “Extreme Energy” was based on my love of “5-Hour Energy” at the time. Over the past 10 years, I’ve drawn a bunch of Clyde and Clarence cartoons. They’re regulars in my comics. 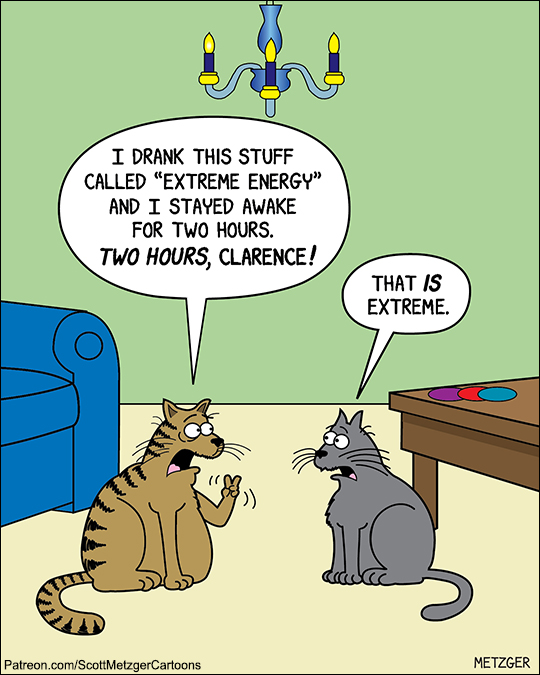 Where do you come up with all these clever ideas for your cartoons?

Ideas usually come directly from my cats or from my life. Sometimes I’ll see one of my cats doing something silly or annoying and there’s a cartoon idea right there. Other times, I’ll take something that’s happened to me and put it in the ‘cat world’ or the ‘dog world.’ A few months ago, we went to Six Flags to celebrate my daughter’s birthday and these two cartoons came from that experience. 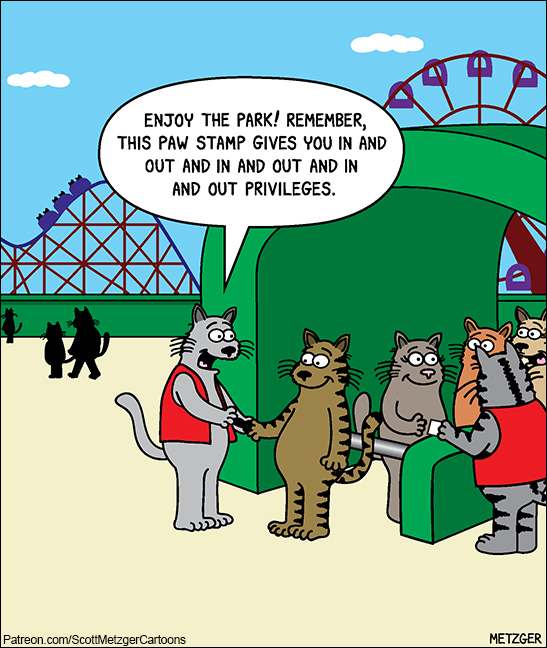 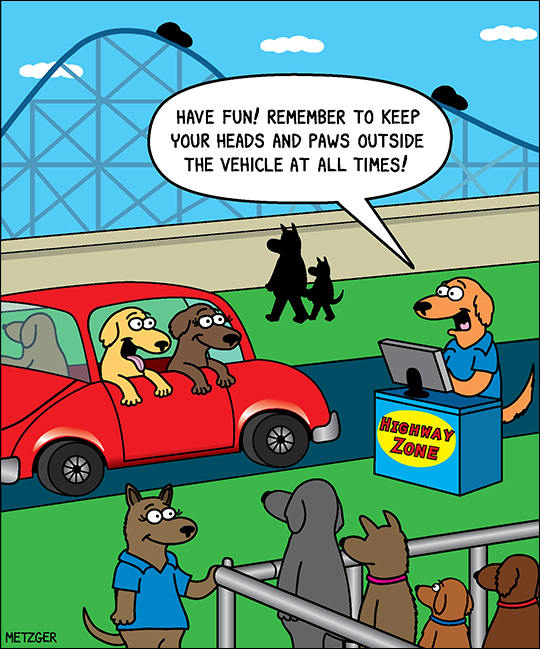 I sketch the comic in pencil and then scan it into my computer. Then I color it in Adobe Illustrator with a Wacom tablet. A typical cartoon takes about 60-90 minutes to sketch and color. If it has a lot of characters and/or a detailed background can take up to three hours. Below is a cartoon in progress and the final version. 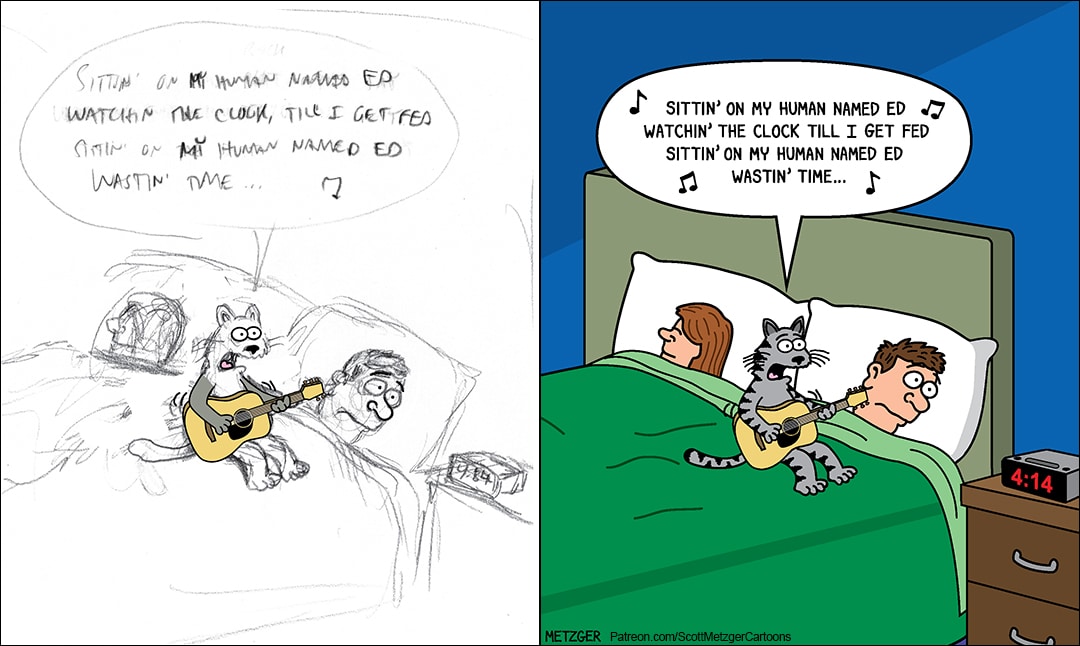 Do your cats serve as inspiration for your comics?

Definitely. My two cats, Max and Hannah, always provide inspiration for comics. Max is a tuxedo cat and Hannah is a Siamese-Calico mix. Max is super social and jumps in my lap at every opportunity. He also likes my wife and kids (he loves everyone), but I seem to be his favorite person. Hannah on the other hand prefers my wife and daughter. She’s somewhat aloof around me and my son.

Max wakes me up early almost every morning. His go-to move is to flop on my chest and meow until I wake up. If I ignore him too long, he’ll smack me on the nose. The “Sitting on my human” cartoon above was inspired by Max. This cartoon was inspired by Hannah. She can’t stand being picked up or held. 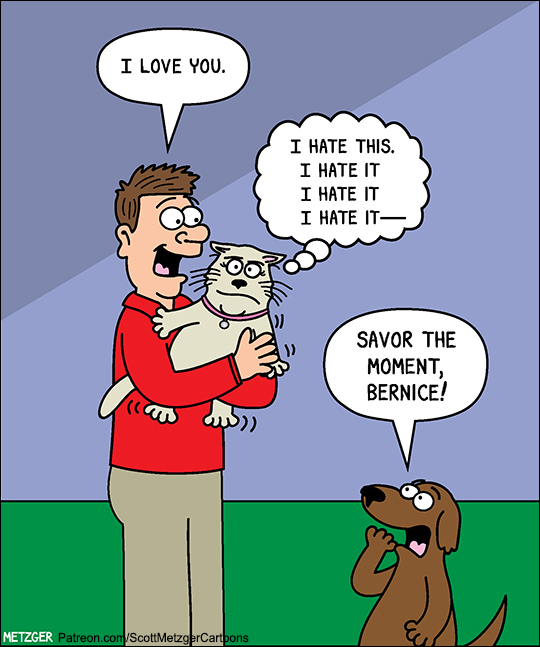 What’s something special you’d like for people to know about the art you create?

Every once in a while, I’ll put in details that I know no one will see. Below is an example. I put text on the plaque even though I knew it would be illegible in the final version. It was for my own entertainment.

One thing that’s changed recently is that my kids—13-year-old daughter and eight-year-old son—will occasionally give feedback on cartoons. They might suggest a color change in the art or my daughter might even suggest a text change. Their suggestions are usually spot-on. My wife gives feedback as well (she has a great sense of humor and is also a good artist).

Here’s a cool story about my daughter: a few months back, I drew this cartoon below—it’s a parody of the Netflix show, Cobra Kai. My daughter watched me as I was finishing it up and she said, “Instead of ‘No Mercy,’ it should say ‘No Purring.’” I was like, “Yep, you’re right. Great suggestion.” It made the cartoon funnier and I changed it. 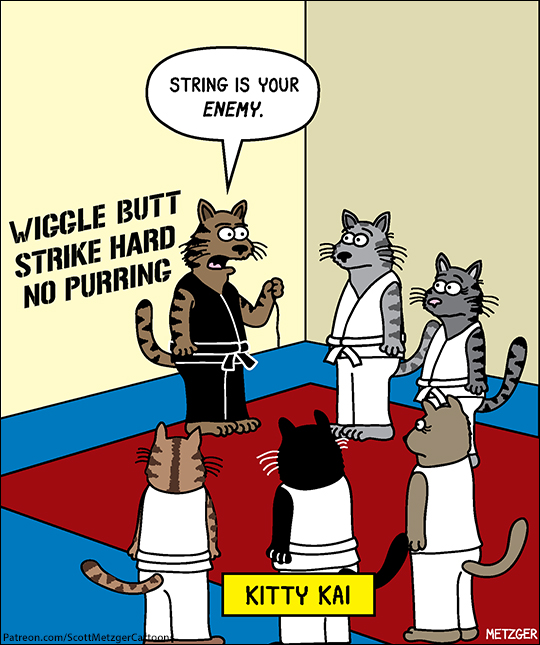 I’d like to give a special “thank you” to Scott for sharing his wonderful comics with my readers and for giving such great responses to my questions. If you’d like to see more Scott Metzger Cartoons or make a kind contribution to the arts, you can find his social links below. 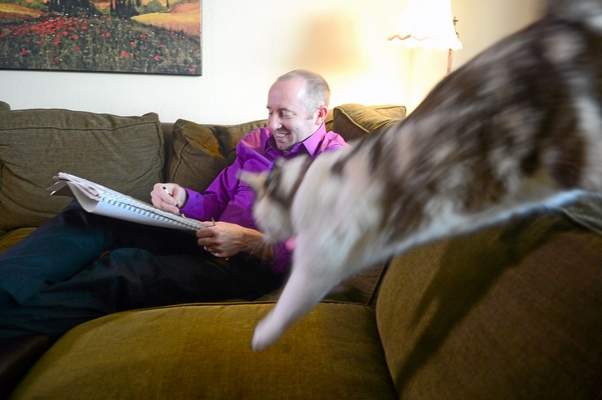