Meet Maverick: A Rescue Cat That Hits The Road Like A Boss

Each cat is beautiful, but there is something oh-so-majestic about long-haired kitty cats. And when you combine that luxurious long hair with a tuxedo cat pattern, it’s enough to make many cat lovers instantly ooh and ahh. For one lucky homeless kitten once named Wyatt, he found his happily ever after with a woman who has a heart for cats in need.

Now he spends his days hitting the road with his cat mom, and looking like a total badass wherever he goes! Combine that classic cattitude with majestic fluff, and it’s hard not to look effortlessly cool at all times. 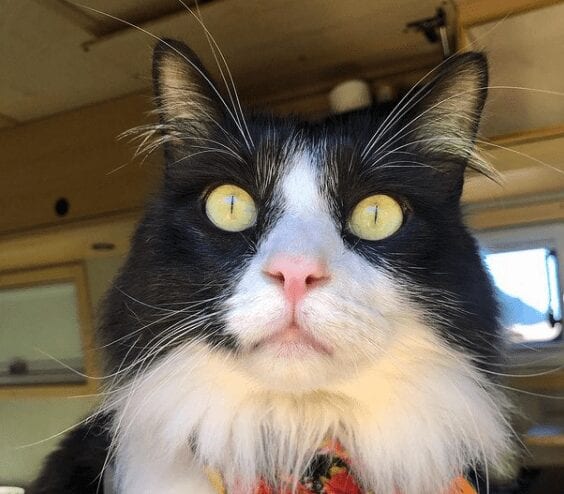 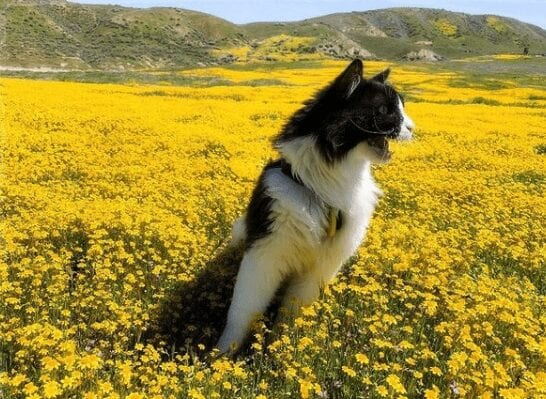 I recently caught up with Maverick’s cat mom and asked if I could feature this little cat “outlaw” on my website. Thankfully she agreed, so keep reading to learn all about this cool cat.

How did Maverick come into your life?

I applied for a cat online at a local rescue but that cat was not available for adoption due to having worms. They recommended another cat to me named Wyatt based on what I wrote I was looking for in a cat. I went to go meet Wyatt, who was being fostered pretty close to me, and met this cute 6 month old black and white cat. He wasn’t very social, wouldn’t let me pet him, but wasn’t afraid of me either. I found out from the foster that he and his three littermates were found at 4 weeks old without their momma and taken to the rescue. 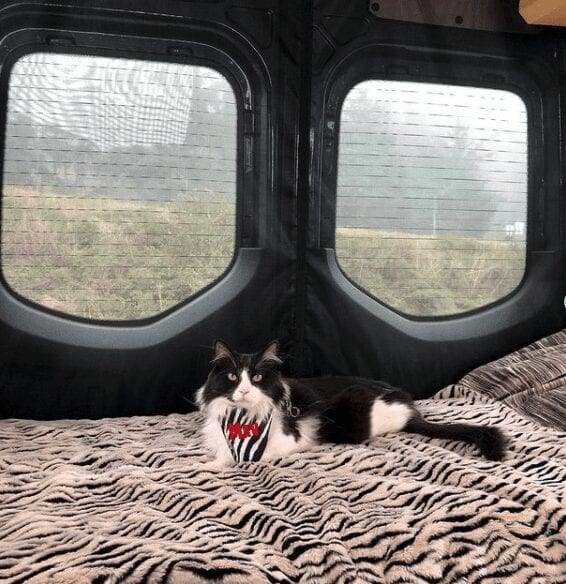 I wasn’t sure we’d be a good match since he wouldn’t let me pet him, but the foster mom told me to take him for a day or two to see if we bond, so I agreed. Within an hour of being at my house, Wyatt pretty much stole my heart and adopted me! I asked the foster mom if Wyatt was attached to his name and she said not at all, so that’s when the naming process started. I wanted an ‘outlaw’ name for him so I was reading an alphabetic list of names out loud from the internet and when I said Maverick, he meowed, so I said it again and he meowed again. I finished reading the names without any other meows, then I said Maverick one more time and he meowed, so he pretty much picked his own name. 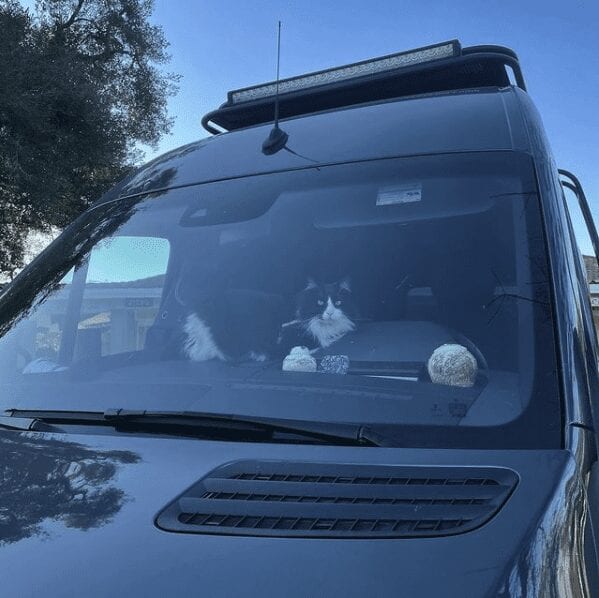 Maverick is a really easy going cat. He adapted to my schedule and won’t wake me up or hassle me like other cats can. He is the most vocal cat I’ve ever had. He meows a lot and can be very demanding for attention when I’m working on my laptop and on the phone. My friends all know his meows because he’s so vocal. He is part adventure cat wanting to explore places, and part lap cat wanting to lay with me and bond. He’s super loving and affectionate, always rubbing his head on everything, especially my chin.  He likes to bury his nose under my chin when he lays on my chest and often falls asleep that way. 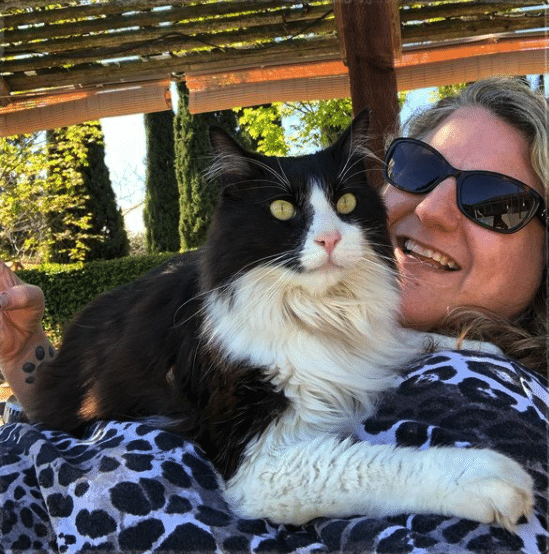 When it comes to other people, Maverick is a bit aloof at first. He doesn’t let people approach him or pet him right away. He prefers to get to know them so if they sit down and hang out for awhile, he will eventually start walking around them, rubbing on their legs with his tail and face, then finally let them pet him. But once he knows you and likes you, he’s super loving and demanding of attention. 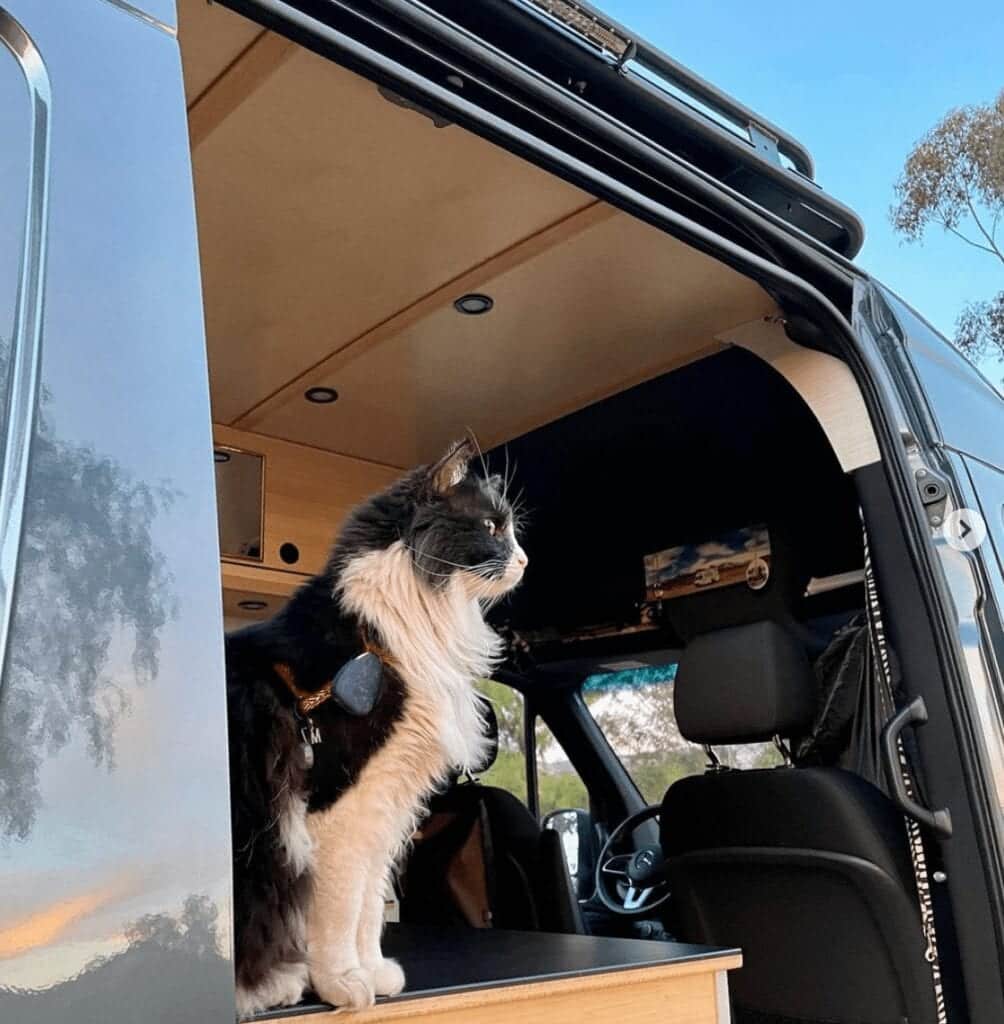 How does Maverick feel about hitting the road?

The first weekend after I adopted him, I took him to a park on the cliff overlooking the ocean to see how he would do on a trip.  He didn’t like the car motion too much but once I got to the park, he jumped out (with his leash on) and started to explore.  He was very curious and not afraid to be outside. That’s when I knew he could go on road trips with me. A few months later, I took him on his first trip in the RV I had at that time to California’s central coast. 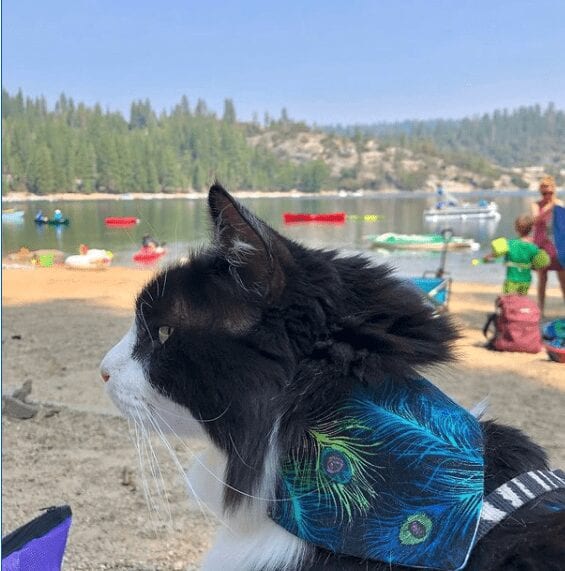 When I park, he’s usually eager to jump out and explore. He loves that part so much and never goes far from my vehicle. I used to keep him tethered but we’ve been doing this for 4 1/12 years now and we’ve built up trust, so I let him free roam now. He wears a Jiobit tracker so I can track him if need be, which gives me a sense of security. 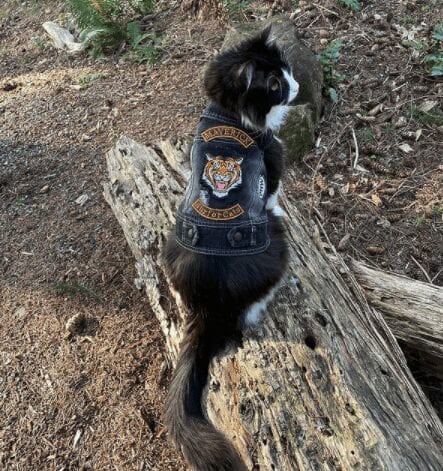 What are Maverick’s favorite hobbies?

Maverick loves to prowl around the house, hunt for lizards, mice, rats, and birds, and he loves to play with feather toys, and mylar crinkle balls. He also loves his brand new 80″ high cat tree in the windows of our new house, and watches the deer from his high perch. When we travel, he loves to explore all around the campsite and climb trees. He’s also great at walking on a leash when we stay in places that require leashes or if we’re somewhere that has more dangerous wildlife. 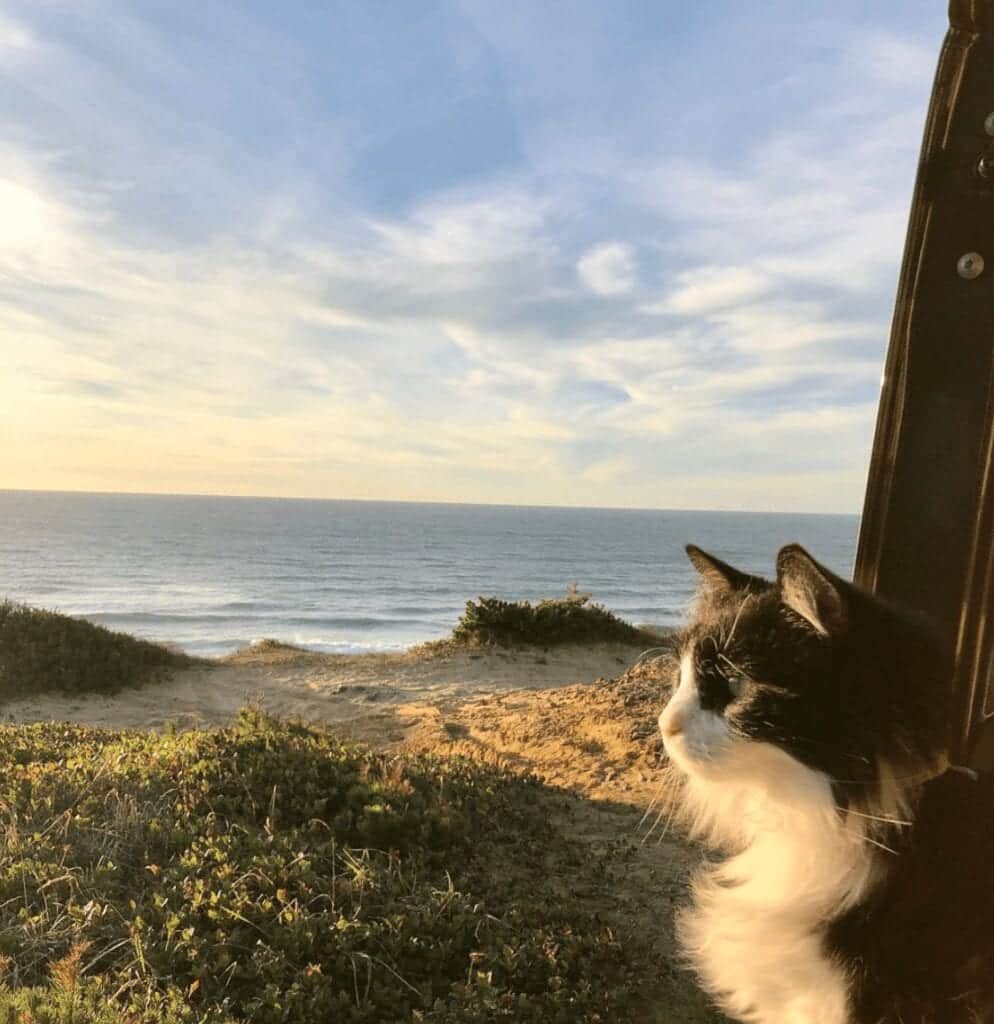 What are Maverick’s favorite places to explore?

Maverick loves sand and dirt a lot. He likes to roll around in it and explore all the little holes. He also likes rocky areas where he sniffs around the rocks and the gaps. He’s also a fan of wooded areas with trees and bushes. He’s pretty versatile, he pretty much likes any place that isn’t too busy with people and dogs. Lots of noise and activity makes him nervous, which I’m guessing has to do with his feral upbringing. I usually make sure I find a place that is less crowded knowing that he’s more comfortable when it’s more quiet. I plan on his welfare on my road trips and choose places to spend the night that are well suited for both him and I. 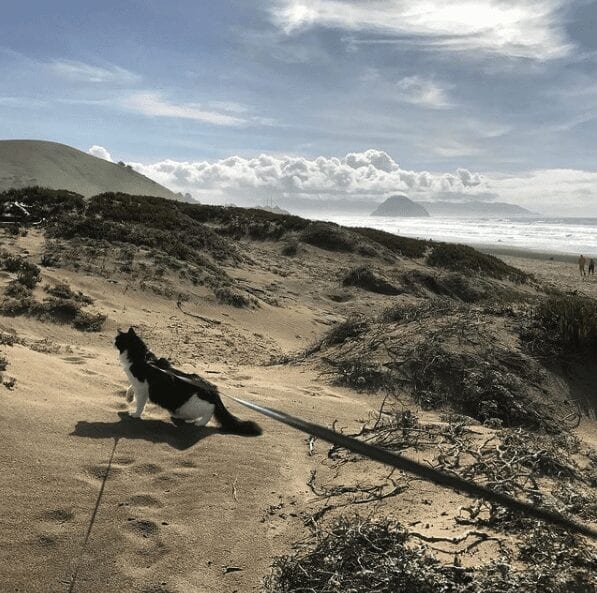 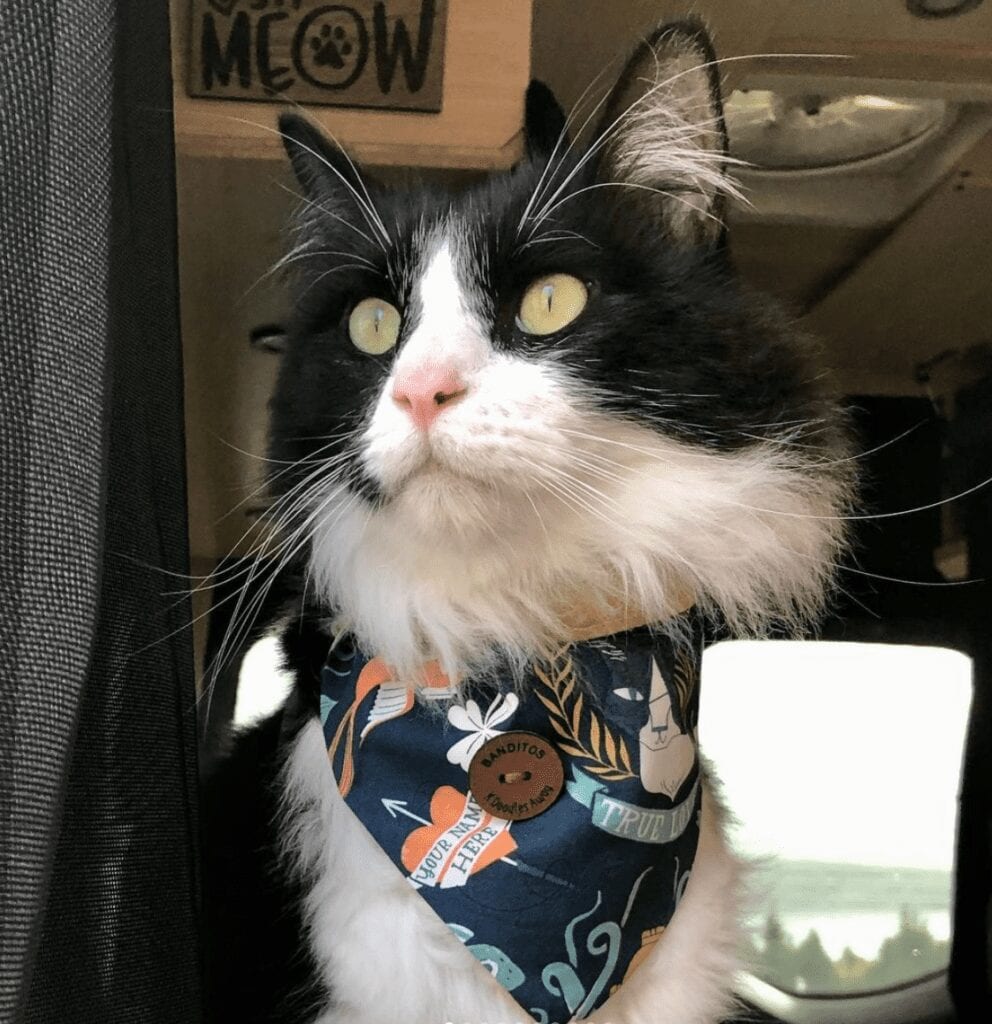 What’s something special you’d like people to know about Maverick?

Maverick is really smart and learns tricks really quickly. He naturally started giving me kisses on command, which means he leans his head forward so I can give him a kiss on his forehead. Then I taught him to give me a fist bump, which he picked up in about 10 minutes, and now he’s learning to sit on command.

Because I didn’t want a litter box in the RV (I have a van now), I toilet trained Maverick when I first adopted him and he took to it really quickly. I found out that many cat experts don’t recommend it after I trained him, but since he’s an indoor and outdoor cat at home, he basically does his business outside now. He actually digs a hole and buries it, so I look at it as fertilizer for plants. He’s much like a dog in that he will meow by the door to let me know he needs to go outside. Same thing on our road trips, he let’s me know when it’s time for him to do his business and I let him out. 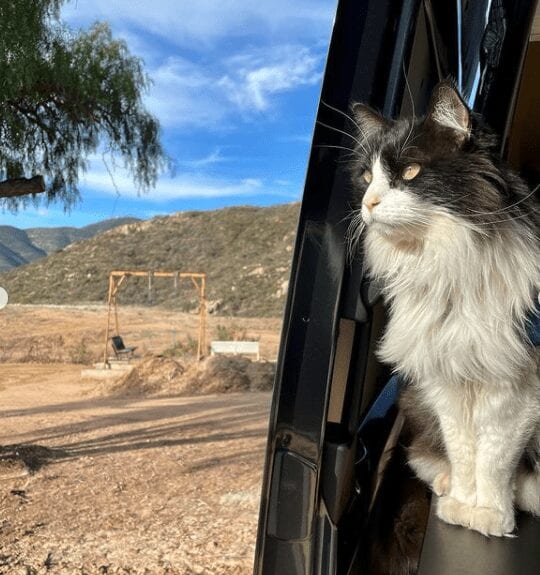 Can’t get enough of this adventurous cutie? Be sure to keep up with him on Instagram!

I’d like to give a special “thank you” to Barbara for allowing me to share Maverick’s story and photos with all of the Cattitude Daily readers. If you know someone who’d love to see Maverick, don’t forget to share! 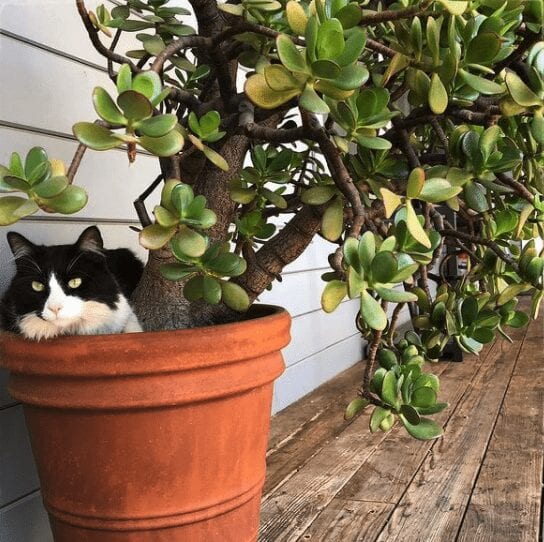 As you can see, Maverick still does your normal cat stuff, too! 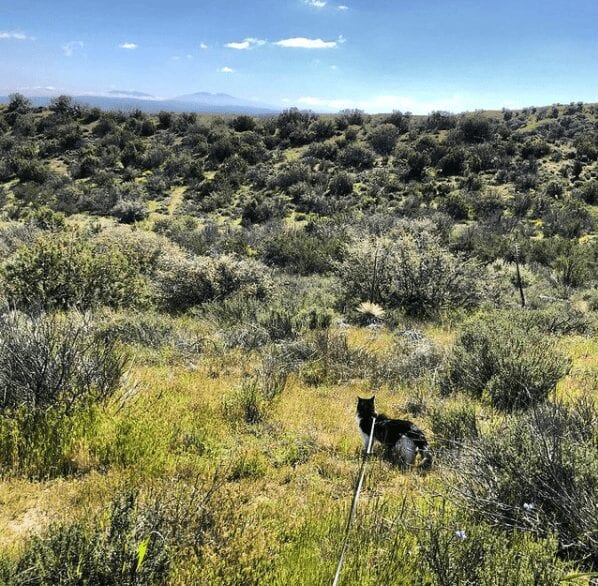