Pastry chef Taylor Le and her cute cat named Muji expected a relaxing holiday in a new home state. That plan went out the window, however, before the pair even made it past airport security. Their trip to LaGuardia Airport on Christmas Eve turned disastrous when Muji bolted into the ceiling and disappeared. It took almost two weeks, but this Christmas catastrophe is finally over.

Ready to move across the country, Le showed up to the airport on Christmas Eve with Muji in an airline-approved carrier. But when TSA agents insisted she remove the cat from the carrier to make it through security, she knew right away it was a bad idea. She told New York Post, 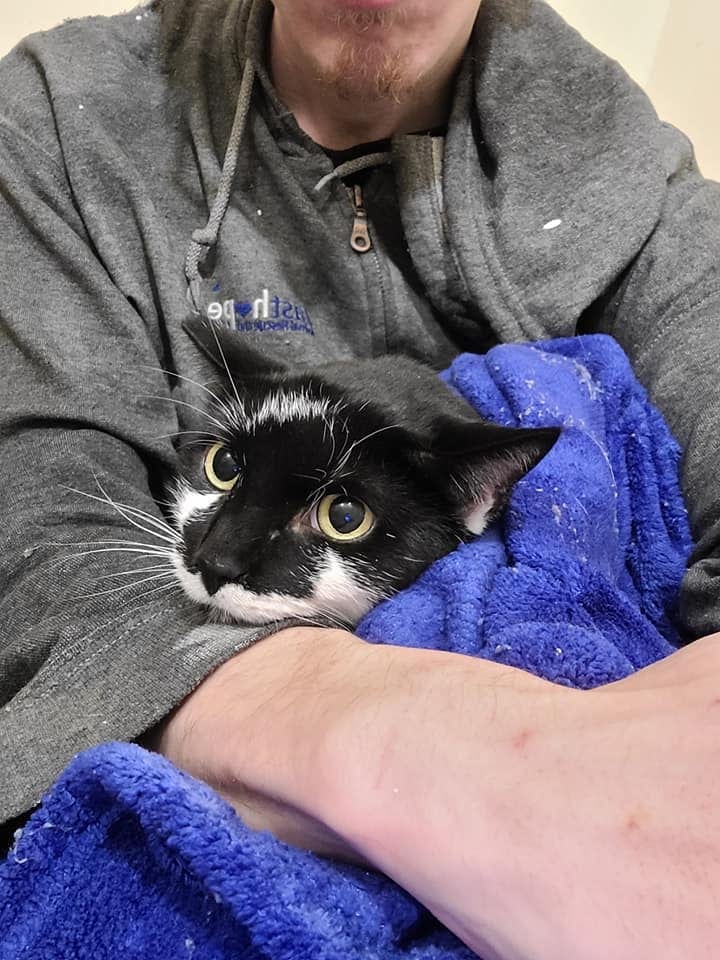 While Le and Muji have a great relationship, Le also knows her formerly feral feline is prone to panicking in new situations. It took about a year and half for Muji to even allow Le to touch her, and being exposed in a crowded airport was already a stressful situation.

But despite her concerns, Le was forced to take Muji out while TSA agents inspected the carrier. Le clutched her nervous cat as she walked through the medical detector, but then the worst possible thing happened. Muji got spooked, bit Le in her panic, and sprinted away.

The terrified six-year-old cat made it back to the check-in area while Le and airport personnel followed in a panic. Muji laid down for a few hopeful seconds, but when Le got close, she bolted again. She climbed over the ticket counter, jumped over the luggage scales, and ran into a mechanical room.

At this point, two airport personnel attempted to calmly approach the cat, but Muji was far from feeling safe. She ended up climbing up several platforms and clawed her way into ceiling. From there, Muji disappeared. 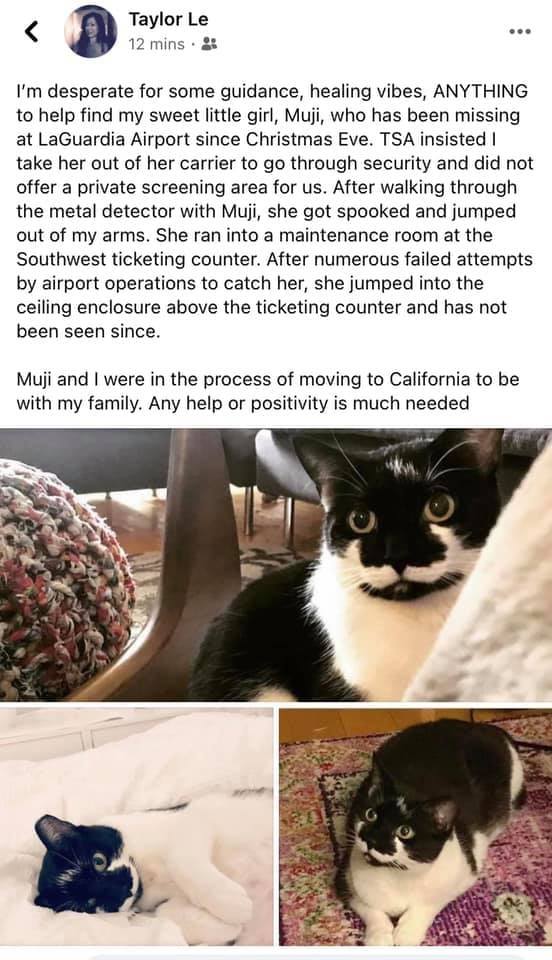 No matter what they tried, neither Le or airport operators could get Muji to come back down. Le missed her flight to keep trying, but nothing worked.

The next day, Le had no choice but to board a flight without her beloved cat. Airport personnel promised to keep looking, but it was clear they were going to need outside help. After posting about her experience to social media, Le was contacted by a safe pet-flying advocacy group called Where is Jack? along with Queens Lost & Found Pets.

Thanks to her reinforcements, Le received permission from the airport to bring in a tracking dog named Abby. It had been days since anyone had seen Muji, but right away Abby signaled that the lost cat was still in the ceiling. They knew her approximate location, but nothing, including gentle coaxing and open cans of cat food, could convince the still scared runaway to show her face. 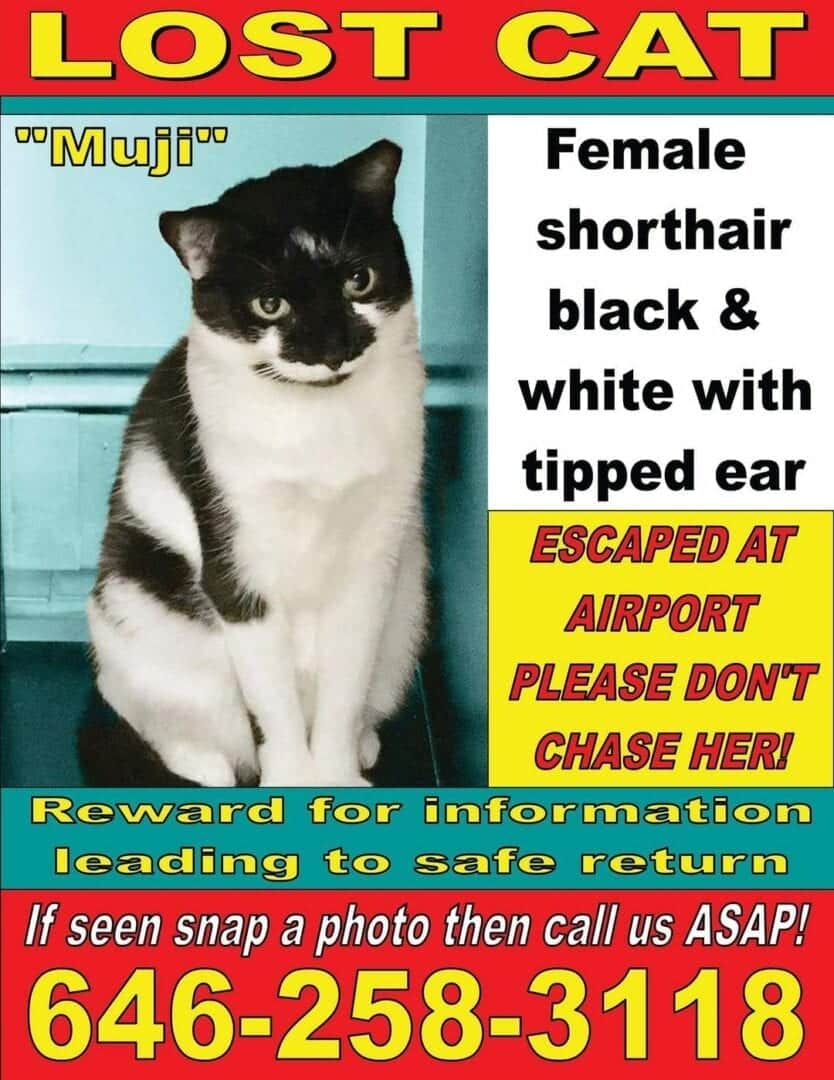 Le knew Muji wouldn’t survive in the airport ceiling forever. Time was running out, and she was getting desperate.

A long eleven days after the disastrous event, a member of the rescue team sent Le a special video. Muji was finally caught!

“I started crying. It was a miracle.” 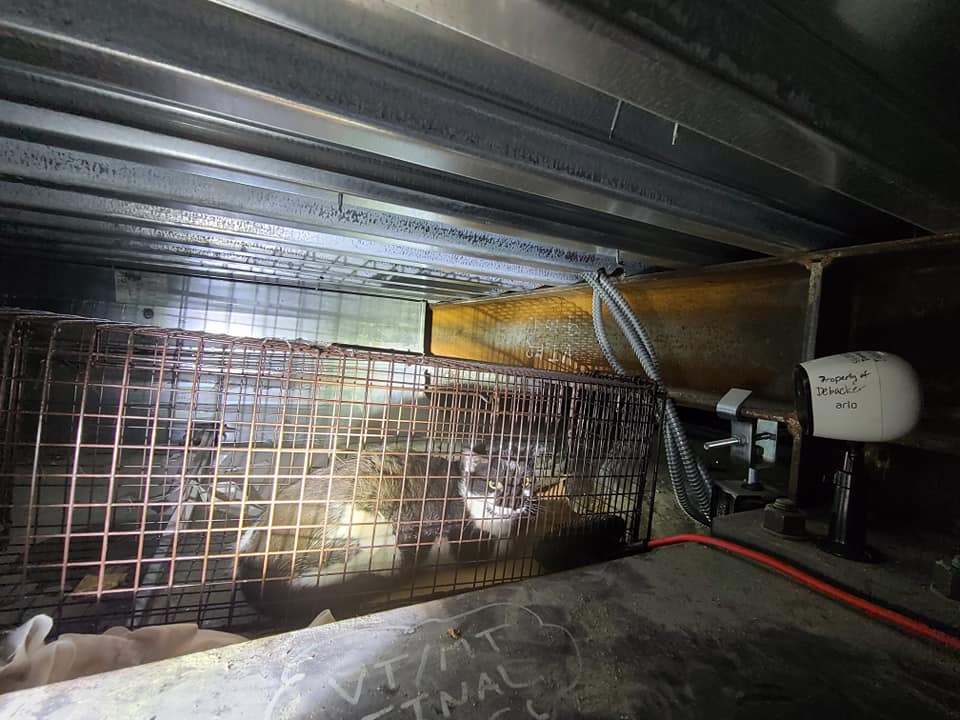 Muji was still extremely stressed, but she was physically safe. Le flew back to New York to be reunited with her cat, and now she’s again planning out how to get Muji safely to her new home. They have another flight booked, but this time, Le purchased a TSA-approved cat harness that Muji will have on at all times. She also plans to demand a private security screening to reduce Muji’s stress.

It was a chaotic eleven days and a stressful holiday season, but Le never considered moving without her beloved cat. Muji is simply part of her life, and Le is beyond relieved that she can move on in her new home with her best friend by her side.

With millions of people passing through Louisville Muhammad Ali International Airport every year, the security team is used to surprises. What they weren’t expecting, however, was to find a tiny stray kitten wandering all alone on a terminal ramp. It was a busy night, and there was no sign of a mama cat or kitten siblings. It was a dangerous place to be, but the airport’s public safety officers knew just what to do.

With the tiny kitten out of harms way, the compassionate members of the airport’s operations team got to work. They cleaned the kitten up, gave it food and water, and cared for it overnight. While the kitten was a little scared, he seemed to know he was in good hands. And no one can blame the security officers for doting over their surprise visitor. Just look at that cute face!

After reporting the incident and making inquiries, there was still no explanation for where the kitten came from. No one knew of any stray cats in the immediate area, and there were no reports of a tiny missing kitten. Of course, the kitten had to come from somewhere, and the most likely scenario is that it was a stray that somehow wandered far away and snuck past airport security.

Regardless of where it came from, the kitten rescuers had to decide what to do next. Thankfully, it wasn’t a hard decision.

The day after the big rescue, public safety officer Wes England fell in love with the little guy. He knew his family would feel the same, so the dad of two made the decision to adopt the adorable stray. His family named the little guy Boeing, like the airplane, and he’s being called Bo for short.

It’s only been a few days since Bo found himself a family, but England says Bo and his two kids are already inseparable. An airport terminal ramp is no place for a kitten, but little Bo just happened to be in the right place at the right time.