Can Cats Get Hiccups?

People get hiccups all the time, but what about cats? Have you ever heard your cat make repeated noises that you couldn’t quite identify? It wasn’t a sneeze, cough, or meow, and it sounds different than a trill or chirp. Out of all the vocalizations your cat can make, hiccups are somewhat rare, but they’re definitely possible. They sound a lot like human hiccups, and unfortunately for your cat, they can be just as annoying. Cat hiccups can last for hours at a time, but should you be concerned? Let’s look at whether or not hiccuping is a bad thing, or if it’s something that’s more amusing than alarming.

What are Hiccups, Really?

If you’re looking for the scientific explanation for hiccups, Pet MD says,

“Hiccups are generally caused when the diaphragm contracts involuntarily at the same time as the glottis [vocal cords] closes.”

The mechanics of hiccups are the same whether you’re feline or human. Sometimes they’re loud, and sometimes they’re mostly identified by the involuntary and repeated jolts and jumps. You know right away when you’ve come down with a case of hiccups, but identifying them in a cat can be a bit trickier.

Here’s a video of cat hiccups to give you an idea of what they look and sound like.

There are a number of known causes for hiccups. First, the involuntary action can happen when nerves are randomly irritated. Scientists aren’t sure what actually causes the irritation, but the spasms could be a sign of some kind of minor inflammation or sensitivity.

Hiccups also happen when cats eat too quickly and swallow a lot of air at the same time. This is why hiccups are more common in kittens than they are in adult cats. Kittens are still figuring out how to eat. They get so excited about food that they don’t chew properly and swallow extra air. As they grow up and get better at chewing, hiccups become less common. That doesn’t mean, however, that adult cats can’t get hiccups as a result of either overeating or eating too fast. It can happen to any cat at any age.

A third explanation for cat hiccups has to do with hairballs. When a cat is hacking up that mess of fur, their throat is doing a lot of work. If it’s a particularly difficult job, the throat can become irritated or the cat might suck in too much air between hacks. This can cause the diaphragm to spasm into a fit of hiccups. 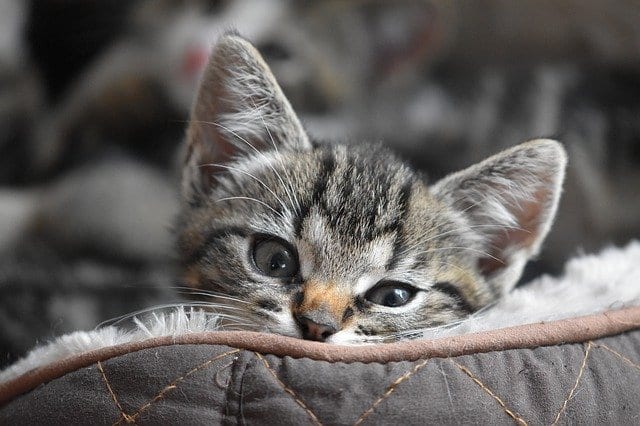 Should You Be Concerned?

Catching your cat in the middle of a hiccup fit can be alarming depending on their intensity, but it’s almost always nothing to worry about. You don’t head to the hospital when you get the hiccups, and your cat most likely doesn’t need to see a vet. It’s perfectly normal, and the little spasms should stop soon.

The only reason you’d need to be concerned about your cat’s hiccups is if they last for longer than a day. Not only will your cat most likely be irritated and uncomfortable, but there’s the slim chance that the hiccups could be related to something like asthma or an allergy. This is more common in senior cats, but you’ll need a vet to offer a diagnosis. 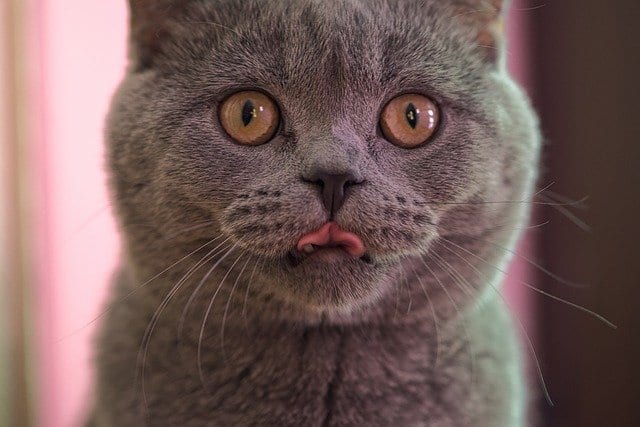 Humans have come up with a long list of mostly amusing home “remedies” for annoying hiccups. Remedies is in quotes here, because these old wives tails are unreliable and don’t usually work. Holding your breath, pulling your tongue, swallowing a lot of sugar, and having someone scare the hiccups out of you are all fun to try, but don’t get your hopes up. And when it comes to cats, most of these are really bad ideas.

It’s never a good idea, for example, to purposefully scare your cat. And good luck getting them to hold their breath or allow you to tug on their tongue. Once your cat starts hiccuping, it’s best to let it stop on its own.

If your cat gets the hiccups regularly, however, there are ways to help prevent the spasms. First, make sure your cat isn’t eating too much or too fast. It might be a good idea to serve smaller meals throughout the day to prevent this. Your cat should also be able to eat in peace without a lot of noise or distraction happening in the background. And don’t forget that they need plenty of water!